Jan 4 / Dynamo Jakk
This image was originally posted by Meister von San Vitale in Ravenna - The Yorck Project (2002) 10.000 Meisterwerke der Malerei (DVD-ROM), distributed by DIRECTMEDIA Publishing GmbH. ISBN: 3936122202., Public Domain, https://commons.wikimedia.org/w/index.php?curid=6435925
From out of the fryin' pan
We jump into another form of slavery
- Tupac

These words by Tupac couldn`t be truer. Slavery is a concept that we deem to be a thing of the past. The modern ideal of “freedom” and “liberty” make us think that human civilization has broken the shackles of slavery that were present in the ancient world.
This however is simply an illusion. As Tupac said, from out of the fryin' pan, we jump into another form of slavery!
Forms of Slavery

It is simply the form of slavery that has changed. In the past, slavery could be seen and understood. Whereas today, people hardly feel it. Today we have many varied forms of slavery but the slaves are in a state of hypnosis, where all they can feel is bliss.

The 9-5 rat race, is the most apparent form of slavery. People are enslaved by their job. The “masters” of the world dictate the lives of the slaves. We wake up everyday, almost mechanically, take a shot of coffee before leaving for work. Spend the day at work and leave for home tired. If you are lucky, your commute may be short but not everyone has such luck. After spending a few grueling hours commuting, we return to our homes, too tired to enjoy our lives.

This is how most of the people in the world are living today. The draw back of this lifestyle is that we cannot give the right amount of time to our children and family. We cannot even take out time for ourselves, to enjoy this life and travel at will. In simple terms we are enslaved to the 9-5 rat race.

In a similar manner, there is another form of slavery that very few people are aware of. The strawman entity created for every individual at the time of their birth, through their birth registration certificate acts as a vessel to allow the state to enslave individuals under a fictitious debt system.

The birth registration a certificate gives rise to an artificial entity named after the newly born child. This artificial entity or the “strawman”, serves as a vessel for the state. The state uses this vessel to take out debt on behalf of the strawman. What people do not realize is that they can initiate a legal divorce with this artificial strawman and become financially free from the system that has been created to enslave us right from our birth.
There are many such deceptions that utilize the modern legal and administrative system to enslave us. The majority of people are oblivious to these mechanisms of slavery and this ignorance gives legitimacy to modern slavery.
- The Justinian Deception

The strawman deception utilizes administrative and legal means to enslave us. The Justinian deception, uses them through the medium of language to enslave and trap us. Before we try to understand what the Justinian deception is, we should understand how language works.
This may sound too simple but knowing how language works, is the key to identifying this deception.
English is the most commonly used language in the world. It is the official state language in many countries. Identifying English is quite easy. It is a language, which means that phrases and sentences constructed in English follow a set of grammatical rules. This article, for instance, is written in English. You can easily identify that this is English because the sentences in this article follow the grammatical rules that govern how English is understood.
The most basic rule of written English is that the first word of a sentence starts with a capital letter, to be followed by small letters. The first letter of proper nouns is also capitalized. For coherence and readability, the words are separated by spaces, except for compound words which are joined by a hyphen.
These are the basic rules of written English that everyone knows. These rules are so basic that we do not even bother checking the text we are reading for any mistakes.
Having revised the basic rules of English, let us now look at Latin. English to a very great extent is built upon Latin. There are many forms of Latin such as classic Latin and contemporary Latin but the rules that govern written Latin are the same. Since Latin is a language, it therefore follows that written language must follow the basic grammatical rules that govern Latin. Let us have a look at some sample text in Latin.
“Sed ut perspiciatis unde omnis iste natus error sit voluptatem accusantium doloremque laudantium, totam rem aperiam, eaque ipsa quae ab illo inventore veritatis et quasi architecto beatae vitae dicta sunt explicabo.”
-Section 1.10.32 of "de Finibus Bonorum et Malorum", written by Cicero in 45 BC
Translation

But I must explain to you how all this mistaken idea of denouncing pleasure and praising pain was born and I will give you a complete account of the system, and expound the actual teachings of the great explorer of the truth, the master-builder of human happiness.
It can be seen that the Latin text follows rules of Latin grammar. The words used are from Latin, the sentences start with capitalized letters. The translation of the Latin text is in English, which follows the rules of English grammar, as discussed above.
By now the difference between English and Latin must be clear. So let us now look at a sample text. 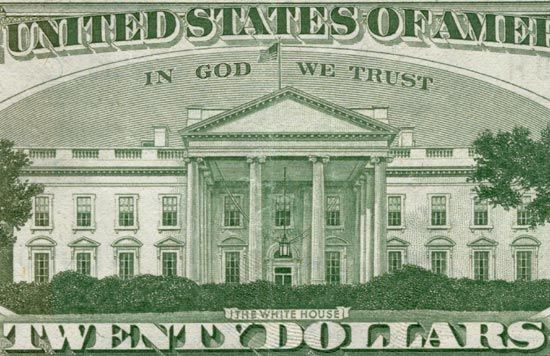 Most if not everyone reading this picture will say that the text is written in English and it says “In God we trust”. Well go over the basic grammatical rules we discussed and then analyze the text.

When you write text in English script but completely capitalize the whole text, it is known as “Dog Latin”.

Dog Latin is simply a mutation of English. It is technically neither English nor Latin. Dog Latin is a debased and mutated form of language. For all intents and purposes, it is not English. Well then why do we see Dog Latin, in every formal document? Check your drivers license, your name will be written in Dog Latin on it. Same goes for any formal document issued by the government.

So the question that arises now is, why is Dog Latin used so frequently in official documents? If you used Dog Latin in your English language examination or if anyone sitting in IELTS test used Dog Latin in their essay, they would get penalized. Whereas government documents use Dog Latin on all important documents. Why do we see two different standards? The answer to this lies in the Justinian Deception.

Dog Latin, is a very simple rule to create an illusion. Dog Latin closely resembles English. Most people do not even consider the capitalized text on their documents because they assume that it is simple English.

This close resemblance with English, makes Dog Latin the perfect language for the deception.

We will end this article here and explore the Justinian Deception more in the next article. Till then you can have a look at your formal documents and see where Dog Latin is used.

In the United States, only the people have the energy to generate money, and in today's system, credit and security interests circulate as money. Interest in things like real estate, bank accounts, and bodies, therefore money and things aren't required.
Enroll
$599 $299