Jan 4 / Dynamo Jakk
This image was originally posted by Meister von San Vitale in Ravenna - The Yorck Project (2002) 10.000 Meisterwerke der Malerei (DVD-ROM), distributed by DIRECTMEDIA Publishing GmbH. ISBN: 3936122202., Public Domain, https://commons.wikimedia.org/w/index.php?curid=6435925
In the previous article, we discussed about different forms of modern day slavery. Ended the previous article by introducing Dog Latin, which is a debased form of Latin. Let us now continue from where we left off. Make sure to read the previous article first if you haven't.
THIS TEXT IS DOG LATIN

If you have read the previous article, you will remember that Dog Latin refers to any text that is fully capitalized and written in English. You can find text written in Dog Latin on your currency notes, on your driver's license and any other government issued official documents.

So why is Dog Latin all over official government issued documents? The simple answer to this is that since Dog Latin is so similar to written English, it is the best choice of script to use to weave the spell of slavery over the general population without anyone realizing what`s wrong.
But how did Dog Latin become the standard for all official government documents, be it in the USA, Australia, Pakistan, UK, Russia, China or any other country? Well there is always a method to madness.
In order to make Dog Latin the standard script on government documents, the “puppet masters” who have enslaved us, devised UNIDROIT.
What is UNIDROIT?

UNIDROIT was established in 1926, as an auxiliary organ of the League of Nations. Although the league of nations dissolved but UNIDROIT was reestablished to continue and fulfill its purpose, which is defined on its site as:

The International Institute for the Unification of Private Law (UNIDROIT) is an independent intergovernmental Organisation with its seat in the Villa Aldobrandini in Rome. Its purpose is to study needs and methods for modernising, harmonising and co-ordinating private and in particular commercial law as between States and groups of States and to formulate uniform law instruments, principles and rules to achieve those objectives.
Some areas upon which UNIDROIT focuses include


In simple words, UNIDROIT aims to harmonize law in the world. To reduce friction between states during trade and other commercial activities. On the surface this sounds good but the facade falls off when we see that harmonization of commercial laws lead to all member states using Dog Latin. 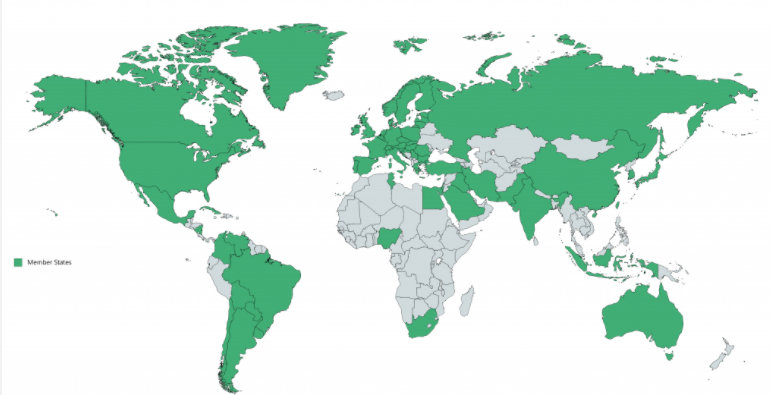 This simply means that membership of UNIDROIT represents a soft coup, where countries willingly give precedence to UNIDROIT conventions. Thus becoming slaves to the global system of modern slavery, under the garb of harmonization of laws.
Think of it like this. The United Nations replaced the League of Nations and the purpose of the U.N is to “maintain global peace and security”. How many conflicts has the UN actually solved?

There are countless other examples where the UN has utterly failed to fulfill its stated purpose. Yet still countries abide by UN rules, almost as slaves. UNIDROIT should be seen and understood in a similar light.
Note that UNIDROIT is based in Rome. This is a key point that ties the whole argument together.

Member countries of UNIDROIT function under the guidance and power of Rome. This is a very subtle point to understand. It no longer matters whether you are a citizen of the USA, Australia or any other member state. As long as your country is a member of UNIDROIT, you are by extension legally bound by the rules of UNIDROIT. In other words, you are subject to the rules of Rome.

When we say Rome, we mean the Vatican city. Which symbolizes the ancient Roman state, not Italy. The Vatican city has two official languages, Italian and Latin.

If we extend the logical reasoning on this point. We are going to realize that since all of our legal and commercial contracts are under the power of Roman authority, then by default Rome holds the legal titles of all of the member states of UNIDROIT.
Concept of Artificial Person

So far we have discussed modern slavery, Dog Latin and how UNIDROIT uses both of these concepts to put member states under Roman authority and rule. The thought procession so far should therefore be clear.

The answer is simple, artificial entities such as companies and strawmen are created by the state. If you set up a company in any country, you cannot do business unless the state grants you the certificate of incorporation. If you become a doctor, a lawyer or a CPA you cannot practice unless the state and the relevant regulatory body grants you a license and permission to practice.

The same rule applies to artificial legal persons. With this point cleared, it becomes easy to understand that with UNIDROIT or in other words Rome (Vatican) having the authority over all member states, has the power to create artificial persons.

We will end the article on this point and continue this discussion about artificial persons, the creator and how the Justinian deception plays out in the next article.

In the United States, only the people have the energy to generate money, and in today's system, credit and security interests circulate as money. Interest in things like real estate, bank accounts, and bodies, therefore money and things aren't required.
Enroll
$599 $299